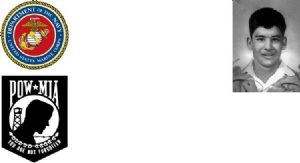 Private First Class Ruben Sanchez Adame was born May 23, 1931 in Alvin, Texas, entered the U.S. Marine Corps from Texas and served with Company C, 1st Battalion, 1st Marine Regiment, 1st Marine Division. On April 23, 1951, PFC Adame and members of Company C were occupying positions north of Hill 307 while defending "Horseshoe Ridge" against an enemy assault. As the heavy fighting became exceptionally intense, ammunition supplies ran down and PFC Adame's squad leader and foxhole mate sent him to the base of Hill 307 to procure more ammunition; he did not return with the supplies and was not seen again by his squad leader. Private First Class Adame was never reported as a prisoner of war, and his remains were not recovered or identified following the conflict. Today, Private First Class Adame is memorialized on the Courts of the Missing at the National Memorial Cemetery of the Pacific.

Based on all information available, DPAA assessed the individual's case to be in the analytical category of Under Review.