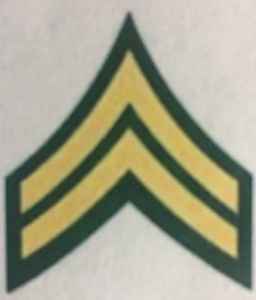 On the evening of November 27, 1950, Chinese Communist Forces (CCF) launched a massive attack against the U.S. and United Nations (UN) troops stationed in the Chosin Reservoir area in north-east North Korea. The resulting seventeen-day conflict became known as the Battle of Chosin Reservoir. At the time of the initial CCF attack, members the U.S. Army's 31stand 32nd Infantry Regiments were defending the area north of Sinhung-ni, on the east side of the reservoir. The defenders were overwhelmed by the numerically superior CCF, and on December 1 were forced to withdraw to allied lines at Hagaru-ri. Chinese roadblocks on the road from Sinhung-ni to Hagaru-ri and constant enemy fire from the surrounding high ground made the withdrawal extremely dangerous. Eventually, the column was broken into separate segments, which the CCF attacked individually. Many men were lost or captured during the moving battle, with survivors reaching friendly lines in Hagaru-ri on December 2 and 3.

Corporal Marvin DeRoy Actkinson was born on December 27, 1931 in Terry County, Texas, entered the U.S. Army from Texas and was a member of Company B, 1st Battalion, 32nd Infantry Regiment, 7thInfantry Division. He went missing on December 2, during the moving battle from Sinhung-ni to Hagaru-ri, though specific details surrounding his loss are unknown. He was never reported as a prisoner of war, and remains unaccounted for. Today, Corporal Actkinson is memorialized on the Courts of the Missing at the National Memorial Cemetery of the Pacific.

Based on all information available, DPAA assessed the individual's case to be in the analytical category of Under Review.